Citizens for climate action: the power of individuals banding together 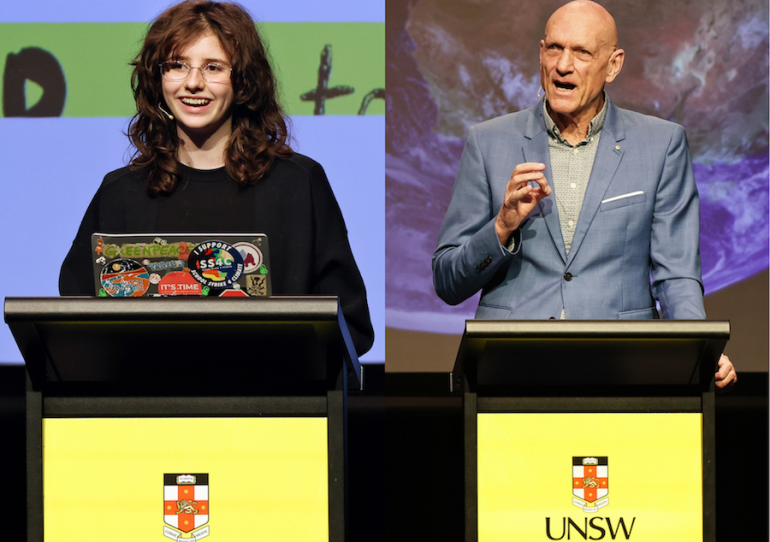 UNSW Sydney’s Gandhi Oration invites speakers to address some of the human rights issues of our time. This year, the UNSW Centre for Ideas asked Jean Hinchliffe and Peter Garrett to talk about what we can do as citizens to create action for climate change.

“Our two important speakers reflected on the possibilities of people coming together to take action, to make a difference, to hold our leaders to account and to think about what we might achieve,” said Ann Mossop, Director of the UNSW Centre for Ideas.

“What can we do to as citizens to make real climate action happen? Their inspiring words encourage us to connect and to use the power we have by joining together as citizens.”

Ms Hinchliffe is an 18-year-old climate activist and a lead organiser in the School Strike 4 Climate campaign. She campaigns for legislative action against the sourcing and use of fossil fuels, along with pushing for Australia to become fully carbon neutral.

UNSW Law & Justice alumnus and member of Midnight Oil, Mr Garrett came to public notice for many as the youngest ever president of the Australian Conservation Foundation (ACF). He served in federal parliament as the member for Kingsford Smith from 2004 to 2013 and was a cabinet minister in the Rudd/Gillard Labor governments from 2007 to 2013.

Where do you start with climate action?

Passionate about social, political and environmental issues, Ms Hinchliffe began her activism at age 13 when she volunteered with the Vote Yes campaign for marriage equality. As a kid, she loved getting involved in debate club and in conversations about “a whole bunch of different social issues” – but always felt powerless about changing them.

“While growing up, things concerned me, but I always assumed the adults knew what they were doing. But year after year, it seemed things weren't getting figured out.”

I always assumed the adults knew what they were doing. – Jean Hinchliffe

Ms Hinchliffe said that the Vote Yes campaign was the first time she could make a tangible impact on something that was important to her.

“I didn't have a vote yet, but I could help a bunch of people to get their votes in and vote yes. I handed out flyers and had lots of conversations. It was an incredible experience for me, because for the first time in my life, I felt I could actually make a difference to an issue.”

Starting with a primary school assignment, climate change incrementally rose to the top of Ms Hinchliffe’s agenda. When she realised the issue was on Australia’s doorstep, she said she had to take action.

“Before I dove into grassroots action and community organising, I personally tried to make a difference in my life regarding the climate crisis, and especially my carbon footprint. I found blogs online about waste reduction and sustainability. I'd only buy ethically produced clothes, I went vegetarian, I'd avoid single-use plastics where possible.

“You can take all these steps yourself, and you can think you have less waste than you had before, but it was also incredibly isolating. You're not connected to anything and there isn’t a tangible impact.”

For Mr Garrett, the story begins much further back.

“We have to start with the two broken pieces of our history, and we have to repair both,” he said. “One concerns the long overdue reconciliation with First Nations peoples who were effectively relieved of lands and waters adjacent to Botany Bay as soon as Cook came ashore. And whilst tangentially related to climate, this really is our unfinished business.

“The second component of our recent history concerns the constant running down and plundering of the environment since Cook's arrival. We can see it in the poor health statistics of the state of environment reports … the underlying health of our ecology is poor and worsening.”

The impact of citizen action

Ms Hinchliffe said it is clear that the biggest threat to the fossil fuel industry was when young activists began working as citizens of a broader community and not as individuals.

“Through years and years of playing by the rules and writing letters, and attending protests on the weekend and doing all these sorts of things, they didn't feel threatened. But as soon as we came together, they realised that they were really seriously in trouble,” she said.

Mr Garrett also called for a broad citizens’ movement, in the Gandhian tradition, to chart a new and equitable clean energy course. He said there are few examples, short of war, where dramatic economic or social political transformation has occurred in Australia without mass civil disobedience. He identified the conscription debates of the early 1900s, the anti-Vietnam War campaign of the late 60s and early 70s and the mainly successful campaign to end logging of native forests in the late 70s and early 80s as some examples.

“In crucial times, students and the young with energy and imagination do play a really important role and lead the way like the School Strikes have, at times of great historical import. And believe me, this is one of those times. Instead of disinterest and despair, we can be active in our own spheres, in our own circumstances, with our own ideas and actions. There's always a place for you, if you want to do something.”

Reaffirming Ms Hinchliffe’s point, Mr Garret pointed out that a clean energy future is not the citizens’ sole responsibility.

When humans of all ages, backgrounds and beliefs deploy their inherent skills and capacities, they organise and literally can create a better, safer world. – Peter Garrett

“Gandhi's example reinforces the fact that once you've made a decision to be an active citizen, then hope arises, energy is created and campaigns can succeed. When humans of all ages, backgrounds and beliefs deploy their inherent skills and capacities, they organise and literally can create a better, safer world. This is what citizens in the climate age must and will do. And I wish everyone well in that crucial and urgent endeavour.”