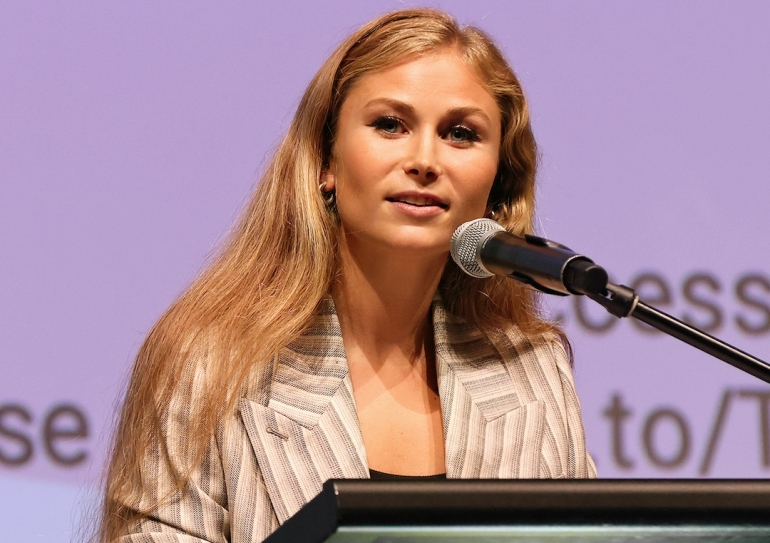 “It was a real pleasure to welcome Grace Tame to the UNSW campus in person. She is an extraordinary and inspiring speaker and her conversation with UNSW academics brought different perspectives together in a really interesting way,” Ann Mossop, Director UNSW Centre for Ideas, said.

Ms Tame dedicated her tenure as Australian of the Year to reframing the way we understand child sexual abuse and to encourage survivors to feel equipped to tell their stories without shame or judgement. She worked tirelessly with policymakers to shift media and legal systems to support survivors rather than perpetrators.

“Firstly, I am standing on the shoulders of giants, with so many people behind me,” Ms Tame said.

“It's one thing to come along with a message, it's another to have that message received, and to be so supported. Also, I am such a privileged person to be able to stand proudly on a platform as a child sexual abuse survivor in Australia.”

In terms of his research, criminologist A/Prof. Salter at UNSW Arts, Design & Architecture said that hearing Ms Tame speak over the past year has been “an absolute game-changer” for the public conversation.

“As Grace has said, it's a moment in Australian history like never before – to have a survivor of child sexual abuse speak so publicly and honestly. And Grace has a particular facility for presenting complex ideas and experiences with ‘grace’, but also very succinctly and with clarity.”

“To be completely honest, I was so intimidated when I saw Grace doing her awesome advocacy, because I had gone through very similar experiences and had never spoken of it. It's so very hard.

“On the one hand Grace has been an incredible inspiration, but I've also had to go really easy on myself in my own journey towards being honest about what I went through. What I really hope people take away from the last year is that disclosing is terribly difficult, and it's not a one-off dilemma. The question comes up again, and again, and again. Do I tell? Do I tell now? Do I tell in this context? Is this the right person?

“So, I really hope this year has given survivors the space to start talking, or to choose not to, if that's what they need to do.”

Ms Tame said it wasn’t until she was 22 years old – seven years after she experienced child sexual abuse – that she first heard the word ‘grooming’.

“We should learn about child sexual abuse in schools and not just as a one-off in Year 9,” she said.

“It should be built in as a permanent part of the curriculum, like you learn about maths. And okay, you’re not teaching calculus to four-year-olds, but you gradually work up and you tailor it.

“I saw a four-year-old recently demonstrating what they learnt in a protective behaviours course. When an adult asked whether they could have a hug, the child said ‘no’. I never learned that as a kid, because I was conditioned to think I always had to do what an adult wanted. And I'm sure in some ways that played into being susceptible to sexual abuse.”

A/Prof. Cripps, a Palawa woman from UNSW Law & Justice and the co-convener of the Gendered Violence Research Network at UNSW, said she saw the need to “just sit and listen” in Indigenous communities.

A/Prof. Cripps described a time when she was working with an Elders’ group that was responding to child sexual abuse.

“They were doing training and counselling with kids with puppets. They were absolutely amazing,” she said. “Government agencies had offered them money to do this work and to scale it up more broadly around communities, but the Elders didn’t take up the offer.

“They wanted to be able respond in their time, and in a way that was appropriate to what their kids needed, and what their community needed. Sitting with those Elders was one of the most empowering things I have ever seen,” A/Prof. Cripps said.

A/Prof. Salter said that while increasingly there is government commitment at the Commonwealth, state and territory level to integrating a broad respectful relationships curriculum from kindergarten to Year 12, there is resistance to it.

“If we are worried about introducing our children to sexual content, well frankly, perpetrators are not so worried about it. They will do it. So, it's really up to us to be making that connection with kids in an appropriate way, supporting healthy boundaries. – Michael Salter

“We often do hear concern, particularly from, for example, the churches and religious communities. They do have concerns about teaching children – from their point of view – about sex. And we really have to push back and drive the point home that this is about protecting kids.

“If we are worried about introducing our children to sexual content, well frankly, perpetrators are not so worried about it. They will do it. So, it's really up to us to be making that connection with kids in an appropriate way, supporting healthy boundaries.

“For the average person, wondering what they can do and trying to find a little bit of hope, I'd like to leave you all with this. It’s about the petition to change the law to get survivors their voices. – Grace Tame

“It's about being smart, and steady. And with our [Grace Tame] Foundation, we've carved out a very specific niche, and we're moving one step at a time. We have a big overarching goal, which is greater harmony between the jurisdictions on sexual assault legislation, but we are going one piece of legislation at a time, and that is quite achievable.”

Ms Tame told a story dating back to the #LetHerSpeak campaign to abolish sexual assault victim gag-laws in Tasmania, the Northern Territory and, more recently, Victoria, which was launched in November 2018.

“For the average person, wondering what they can do and trying to find a little bit of hope, I'd like to leave you all with this. It’s about the petition to change the law to get survivors their voices.

“You might think one signature isn’t very much, but when you put them together, there were 8154 on the petition which gave me a special exemption to the law [before it was changed] which made me the first female Tasmanian child sexual abuse survivor to have a public voice. As a gift, Nina Funnell who organised the campaign printed out all 8154 signatures. It turns out, that’s the size of an old-fashioned phonebook.

Associate Professor Kyllie Cripps is one of Australia’s leading researchers on Indigenous family violence, child abuse and sexual assault. She's worked extensively with Indigenous communities for over 20 years, identifying solutions to support better policy and practice that responds to the needs of Indigenous communities.

Scientia Associate Professor Michael Salter studies gendered violence and complex trauma. He specialises in the study of organised sexual abuse and has researched and published widely on violence against women and children. He's an adviser to the Australian Office of the eSafety Commissioner and the Canadian Centre for Child Protection, among other organisations.

Associate Professor Emma A. Jane focuses her research on gender, misogyny on the internet, and the social and ethical impacts of emerging technology. Prior to academia, she was an award-winning journalist. She has just published her memoir, Diagnosis Normal.

Listen to the podcast of the ‘Grace Tame Speaking Out’ panel.