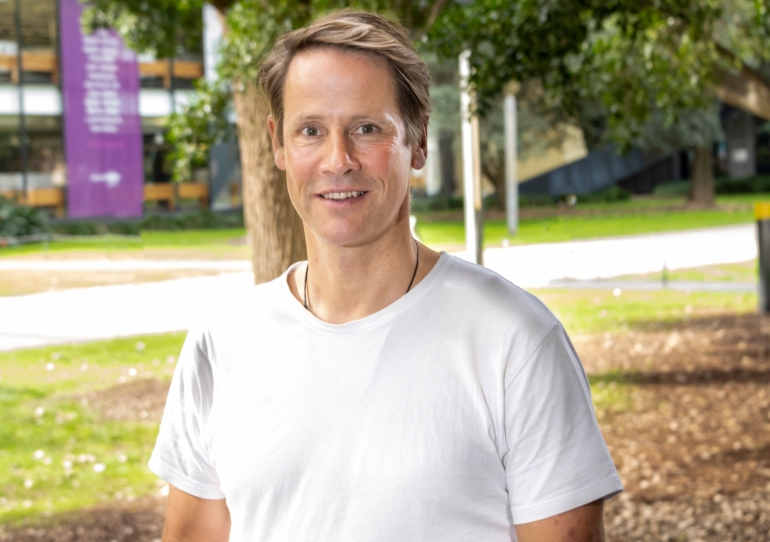 UNSW Engineering Professor Thorsten Trupke has won the internationally coveted IEEE William Cherry Award. The award recognises outstanding contributions to photovoltaic science and technology, by an individual who has devoted part of their professional life to the cause.

The award is named in honour of the late William R. Cherry, a founder of the photovoltaic community and pioneer of using photovoltaic systems for terrestrial applications.

UNSW Dean of Engineering Professor Stephen Foster congratulated Prof. Trupke on the award. He said: “The Cherry Award is a remarkable recognition. It’s particularly special as the winner is decided by their technical and scientific peers and, as such, is often regarded as the top research award globally in the solar technology space. I am thrilled that Thorsten, and his dedication and commitment to the field, has been recognised with this extremely well-deserved award.”

Prof. Trupke is a world-leading semiconductor scientist at UNSW’s School of Photovoltaic & Renewable Energy Engineering.  He has made significant contributions to the field of photovoltaics and solar cell technology through his pioneering research breakthroughs and their subsequent translation to industry.

He invented photoluminescence (PL) imaging, a world-first technology that can identify hidden faults and defects affecting the performance of solar cells and silicon wafers. The technology measures the quality of silicon wafers, solar cells and of entire panels, typically in one second or less. Comparable assessments previously took several hours to complete.

Prof. Trupke commercialised the PL imaging technology in 2007 when he co-founded BT Imaging with UNSW colleague, Adjunct Associate Professor Robert Bardos. The technology is now a standard method used in virtually all PV research laboratories and by leading solar cell manufacturers around the world. It has been central to the significant acceleration in PV research and development, and to improving the competitiveness of the entire solar industry.

Prof. Trupke said he’s very proud to be recognised by his peers. He said it was particularly inspiring given the UNSW professor often described as ‘the father of photovoltaics’, Martin Green, has also been awarded with the same recognition.

“I remember being in Martin Green's office when I first met him and admiring his Cherry Award plaque. The fact that I’m the 2021 recipient has not fully sunk in yet,” he said.

“This recognition is a credit to everyone who has contributed to our work on luminescence characterisation over many years, in particular my outstanding research team at UNSW and my colleagues at BT Imaging.

"There is still so much work to be done. Solar energy will become the dominant source of electricity and of all primary energy over the next 30 years. Contributing to this massive transition away from fossil fuels is very exciting and fulfilling.”

Prof.  Trupke said his team will continue its work on characterisation and quality control of silicon wafers, solar cells and modules, to help guarantee photovoltaics as a reliable source of energy into the future.

“UNSW, particularly the School of Photovoltaic & Renewable Energy Engineering, has made fundamental and highly impactful contributions to this tech space for over 40 years. With the infrastructure, networks and ecosystem that were established here at UNSW over that timeframe, we really are in an ideal position to continue to carry out cutting edge research, contributing to the biggest revolution of our time. Not least, I am thankful for funding from ARENA, who have been key supporters of our projects for many years."