UNSW teams up with Sydney Swans to further athlete education 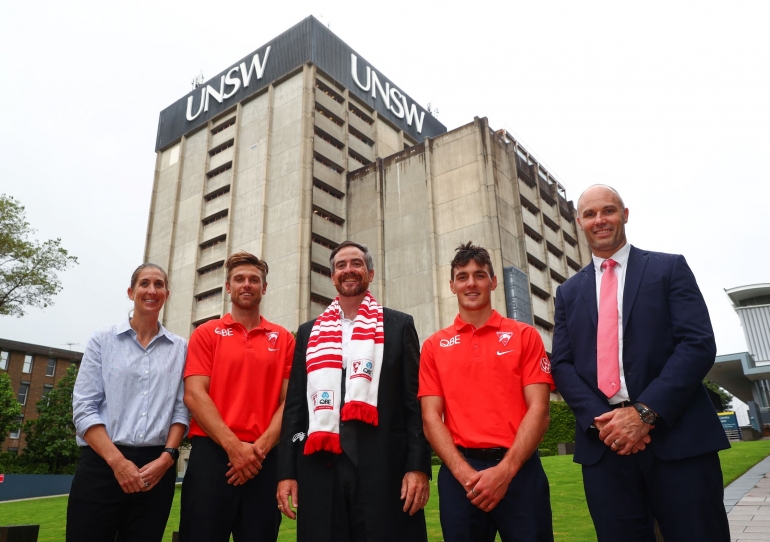 A strong partnership between UNSW and the Sydney Swans – which has led to 10 athletes from the 2022 playing list currently studying at the University – has been formalised this week, with UNSW joining the Swans as an official partner of the club until 2024.

The partnership extends across both the AFLM and AFLW teams, UNSW becoming the second partner of the Sydney Swans women’s team which will enter the AFLW competition next season.

This specifically aligns closely with UNSW’s Women in Sport and Active Recreation Strategy – in 2020 UNSW became the first university in Australia to launch a female-focused sporting strategy.

Sydney Swans CEO Tom Harley is thrilled to welcome UNSW to the club as an official partner. Video: Sydney Swans

The partnership will see the club work with UNSW on developing player pathways for both the men’s and women’s teams to studying at UNSW.

It will also give UNSW students the opportunity to pursue internships with the club and identify any potential research projects which can be undertaken at the club by UNSW students.

UNSW will also support emerging talent, will fund a QBE Sydney Swans Academy Scholarship and will play a key role in the pathway opportunities for all players going forward.

Sydney Swans CEO Tom Harley said he was thrilled to welcome UNSW to the club as an official partner.

“We have many players studying at UNSW, headlined by co-captain Dane Rampe and the support that UNSW has provided our players really started our conversation with them.

“With our entry into the AFLW competition for season seven and the partnership extending across both programs, it’s great to have their support.”

Executive General Manager- AFLW, Kate Mahony said it was fantastic to have UNSW’s support for the incoming AFLW team and that the university would play a big role in assisting players who will join the Swans list.

“It is a fantastic opportunity for our female athletes at the beginning of our list build when we are trying to attract athletes,” Mahony said.

“Having this partnership is just going to be a huge help for them if they are transitioning to Sydney and looking to have education close to the club.

“I’m a big believer that we need to give our athletes as many opportunities off the field as well as on.” 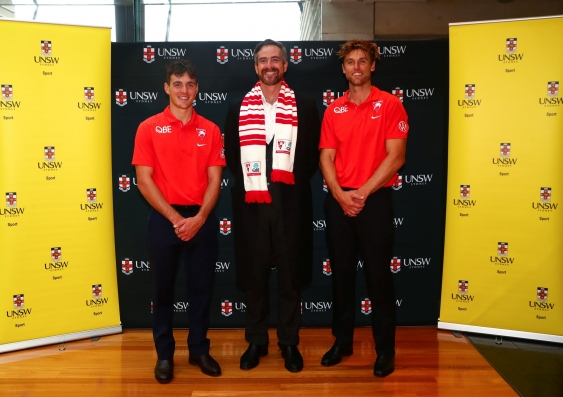 UNSW Vice-Chancellor and President, Professor Attila Brungs, who took on the role at UNSW just a month ago, said the partnership was a perfect match with both organisations having similar alignments.

“I know the team at the Swans not only focus on how they support the players on the field but their whole careers too. Similarly, at UNSW, we think about our students lives as a whole so if you think about both those mindsets it’s a great match.”

The 10 Swans players currently studying part-time at UNSW include Sydney locals Dane Rampe (Graduate Certificate/Masters of Commerce) and Errol Gulden (Bachelor of Arts), who were both drafted from UNSW-ES Bulldogs Football Club.

The duo were on hand to launch the partnership at the Kensington campus and co-captain Dane Rampe said it just ‘made sense’ to have UNSW on board as a key part of career progression post football for the players.

“I grew up here in Sydney and came to UNSW when I first left school, so it’s always been part of my life,” Rampe said.

“More importantly for the club though, we already have a lot of the guys studying here and it’s a really important relationship to have. The club are really pro-active in organising study for all of the players, no matter their age and it’s an exciting partnership to have going forward.”