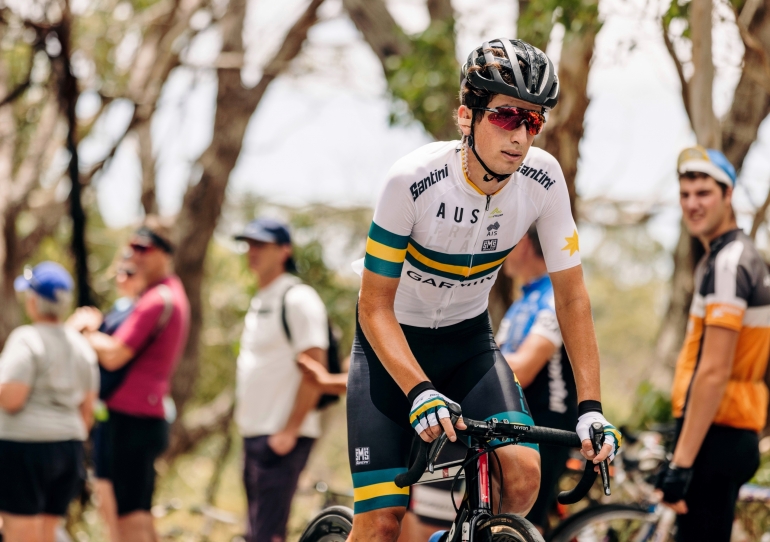 Solely a mountain biker until the age of 15, Dylan George has made a brisk ascent as a road cyclist, like the L’Alpe D’Huez he one day aspires to climb as a Tour de France rider.

And of all things that an UNSW Elite Athlete Scholarship helps the 18-year-old with, the weekly grocery shop ranks towards the top.

Within three years of making the switch to road, the first-year engineering and maths student has won the Australian Junior Road Race title and almost stolen a stage of January’s three-stage Santos Festival of Cycling, during his first professional tour.

After a daring move with 1.5km to the finish, George was pipped on the line to finish sixth during just the second stage of an event foreign to him in every sense.

“I’d never been to Adelaide before,” he said.

His potential has earned George a place on Team BridgeLane UCI Continental, with plans to race in Europe middle of this year and hopes of a World Championships at home, in September - all of which incurs tremendous cost.

Fortunately, the team covers costs of travel and accommodation, especially handy when the cumulative cost per bike is $15,000.

But cyclists still need to look after what they put in their body.

“The team will pay for most things, but you also just forget how much you eat as an athlete,” he said.

On a four-hour training ride, George burns 80 grams of carbohydrates an hour, which is the equivalent of two loaves of bread.

To maintain that level of training costs him $150 for his weekly food bill, $50 of which is just for sustenance on the bike.

“I'd say we probably eat more than any other athlete because we just do so much... most of the guys are training four, five to six hours a day on the bike, so it's pretty hard on the shopping budget.

“It was a hard thing to learn as a junior because it just felt like a ridiculous amount of food to eat,” he said. “But then you come to realise that if I don’t eat that much, I'm not going to make it to the end of the ride or the end of the race, so you just get used to it.

“It is a crazy amount of food especially when you need to carry it on the bike with you too.” 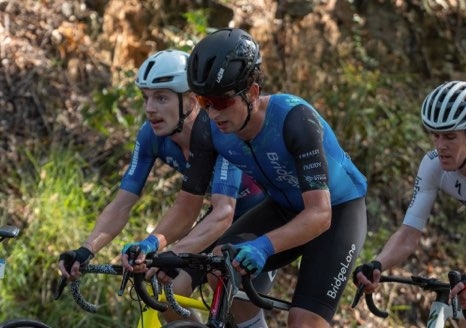 Dylan George on the trails where he still competes at national level as a mountain biker.

Add the 20 to 30 hours on the bike training every week, balancing that with studies, part-time work becomes impossible.

“I’m pretty busy, and a lot of people don't really see that it's pretty much a full-time job, with the training involved.

“I just don't have the time to work. (So, the scholarship), definitely helps validate not getting a part time job for the time being.”

George is due to travel to Europe mid-year for more racing following a second-place finish in the Under 23-time trial and road race at the Oceania Continental Cycling Championships.

As he takes his first steps into the world of pro-cycling, ambitions of the Tour and a Brisbane Olympic Games in 2032, are tempered by the reality of the world he is entering.

“I've seen it in guys a lot before where you might work so hard towards something in cycling and when it doesn't pay off, they've got all their eggs in this one basket, then they drop the basket,” George said.

“Whereas you might go and work really hard towards this race, and it doesn't go well, but you’ve got a uni assignment to finish (and) there's still other goals to work towards.

“I'd be just as happy to become pro-cyclist as I would to just finish my degree and become an engineer.”

Completing his HSC during a global pandemic reinforced that.

“(Last year) I was so focused, my whole goal for the year - I wanted to do well in school - but my main focus was to do well at Junior Worlds and then when that was taken away, it was quite hard for me to shift my focus back to school again.

“I really didn't want to, but then I realised there's nothing I can do about it.

“(I had) all this energy that I was going to focus on cycling, and I may as well just put it towards school now, obviously still going to try to do well, but since I had so much time, I was like, ‘why don't I try to even do better than I thought I could have done and give myself something to work towards’."